Lots of things going on… still working away on some galactic music for a project… in the meantime here is a quick update on things that have been going on.

Penny Black (an independent feature film) had it’s official premiere at the Arohanui Film Festival on Friday evening to a sold-out house! (Also Lapwing and Breakery featured in the festival!) To coincide with that, the score album is now available. You can get it from these places:

My piece “Fourteen Moments for Three” was selected as one of the winners in the NZTrio Composers competition, and was performed in concert in Auckland and Wellington.

Check out the concert below (my piece starts at 1:11:43) and read a review here.

Finally, I am putting together a retrospective concert of work composed during my time as Mozart Fellow on Nov.15 in Allen Hall Theatre… a few world premieres, some earlier stuff, lots of collaborators.. should be a fun concert. The poster by Dan Inglis is below:

And finally, a couple of weeks ago I graduated with my PhD from Waikato University. I was asked to be the student speaker, and I put together some words about creativity, collaboration, and connections… you can hear them here:

Just in case you missed them, here is a collection of the recordings I have released in the past year!

and a ‘poppy’ back catalogue thing:

It has been awhile… I always intend to keep more regular blog posts, but things get in the way – mostly it’s good things like getting caught up in the studio working on new music, so I can’t really complain.

Since last time there has been a bunch of stuff that I thought I would collate here into one handy place – lots of links to things to listen to and watch.

PhD stuff
So, this is all officially over and done with now (apart from walking across the stage to get that piece of paper) – but now, if you feel so inclined, you can read the thesis and listen to the music online… just click here:
http://researchcommons.waikato.ac.nz/handle/10289/9348

Live Music
Premiere performance of ‘Points of Flight‘ for violin and electronics by Tessa Petersen.

Film Stuff
LAPWING – is cranking around the festival circuit.
Here is a little video of myself and Chris Lam Sam talking about the score for this project

Listen to the soundtrack here: https://jeremymayall.bandcamp.com/album/lapwing

MR BAKER
A short film I scored as part of the 48Hr Film Fest is available online:

Back to work – there is some more research to be done on multisensory music (music and taste), as well as a new orchestral piece waiting to be composed.

Last year I worked on an experimental dance film with Dan Inglis and Dujon Cullingford.
The piece is kind of an exploration of breakdancing in an unusual way. It is always a privilege to collaborate with other artists of such high calibre! The final product is now online for your viewing pleasure.

Flare from Dan Inglis on Vimeo.

FOOTNOTE:
On Tuesday I faced the final PhD hurdle – the oral defense. While it was quite ominous in the lead-up (having to defend the last 5 years of ones life is not the most enjoyable concept) – the actual event was quite pleasant! So, while it still seems quite surreal, I can apparently say I have my doctorate… (but really I still need to print the final versions, and walk across that stage looking like a wizard to collect the piece of paper.)

If you would like to, you can get a copy of the music composed for the thesis here:

With the release of the ‘Flutter’ video, I have had people ask me what my next performance piece will be… at the moment I am unsure. We shall see what comes up.
But in the meantime, I thought it might be good to revisit some of the multi-media performance projects I have put together, and collect them all in one place. Here.

Flutter from Jeremy Mayall on Vimeo.

The Long White Cloud from Jeremy Mayall on Vimeo.

Into the Nocturnal Sunshine:

There were a couple of earlier pieces, but unfortunately they were not recorded. They will have to remain lost in the ether.

It has been a little while since I posted here – things have been busy!

Since the last update I have:

This album is “Hybrid Philosophies” – a collection of music written as part of my doctoral studies.

You can get a copy from the link above. You can also find all my current releases by going to bandcamp.

As part of the Sir Edmund Hillary Scholarship Step Higher Award I was lucky enough to head to the Himalayas to spend a couple of weeks following in the footsteps of Sir Edmund Hillary exploring a small part of his trek to Everest and the humanitarian work he was doing in the area. We visited a number of schools and a hospital that he helped build. It was quite an experience – very quiet and remarkably beautiful. The highest point we trekked to was Ama Dablam base camp at 4600m. Here are a few pictures.

The travel also included some time in London, Adelaide, Renmark and Hamilton catching up with friends and family.

Before I left I was lucky enough to collaborate on a project with the Otago University Brain Health Research Centre. Working with neuroscientist Professor David Bilkey I composed a piece of music designed to spark responses in the brain that would be visable on an EEG brain scan. Then for the premiere performance at the Otago Museum there would be someone attached to one of these machines and the brain wave scans would be projected on to a screen as part of the presentation.

You can find out more about it in this clip from One News.

Or in this article from the Otago Daily Times.

Monday 22nd September was the day I submitted my PhD. After 4 years and 205 days; many hours of music; multiple thousands of words – I am very pleased to have this thing done… or at least done until the examiners look at it.

Now that I have some extra time on my hands it means I can really get stuck in on a few new projects, and finishing of some older projects… like the live recording of the premiere performance of ‘Late Song’.

Here is the mix from the live recording of the premiere performance:

And here is the background visuals (by Hannah West) from the performance synced with the live recording:

Recently, I was lucky enough to be awarded the Step Higher Award from the University of Waikato. This leadership award will send me, with 3 other Hillary Scholars to Nepal to explore the work of the Himalayan Trust and the things that Sir Edmund Hillary has done in that part of the world. It is a huge opportunity to see a place I never really thought I would go to, a chance to see the sights, hear the sounds, meet the people, and ideally develop a new composition based on the experience.

I plan to take some portable recording devices with me to try and capture some of the natural sounds of the environment there, and utilise those as an element in the new composition. As part of the award we will all be fundraising for the Himalayan Trust – and for me this will include some new music as well (more details to come soon!)

In the meantime, here is an article from the Waikato Times today about it.

Still busily working away on various projects… a couple of experimental films, an album of instrumental music, an orchestral piece, a couple of multimedia/theatre pieces and anything else life throws my way! It is an exciting time – loving the creative work.

On the past weekend I spent a lot of time out in the beautiful landscape of the lower South Island recording sounds. The first stop was a trip to Invercargill to meet phenomenal musician and all-around great guy Adam Page.

It was great to spend the day with Adam talking about making music, performing, creativity, meditation, beards and other general fun stories! The day even included a quick visit out to Demolition World with writer Duncan Sarkies. This place is something else. If you ever find yourself in Invercargill go and check it out. 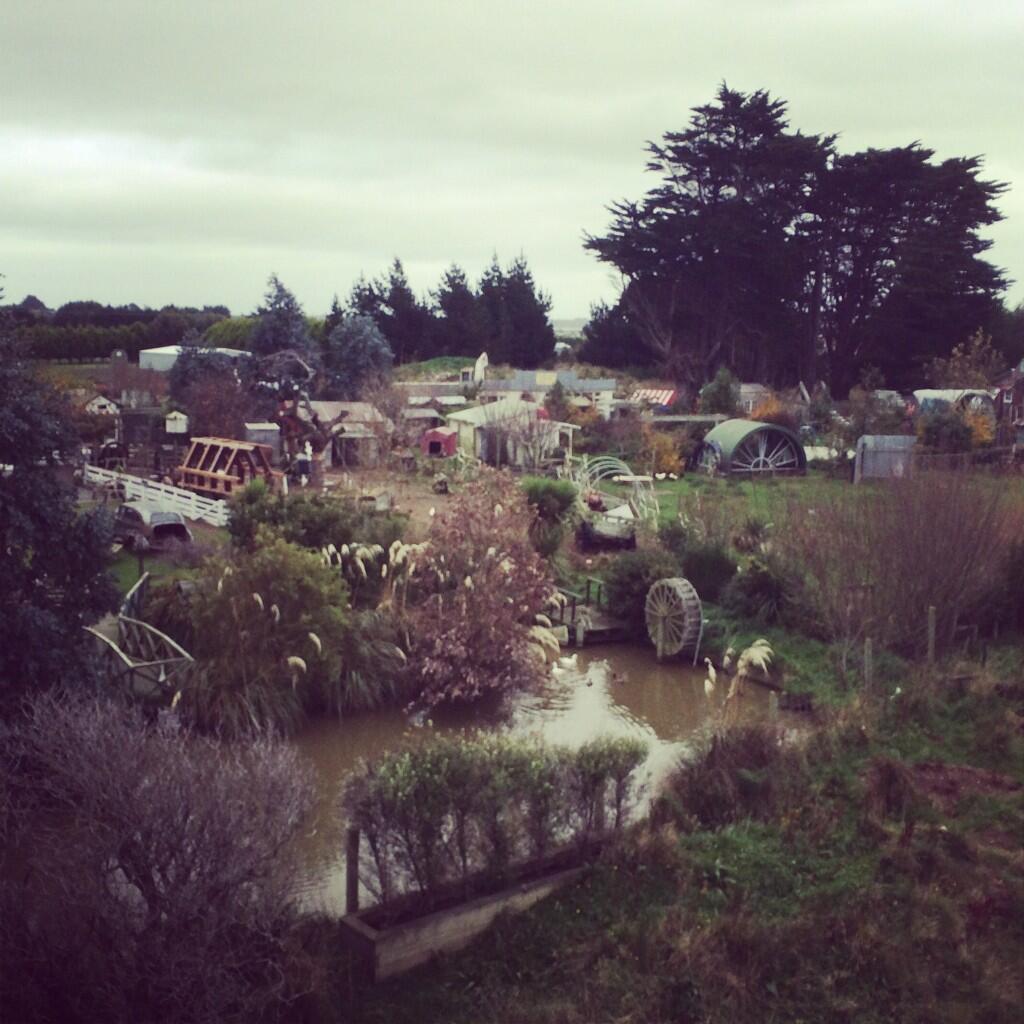 We eventually ended up heading out to the Seaward Bush Reserve to do some recording. It was great to get a performer like Adam into nature and capture the sound of his playing alongside the birds and other creatures living in these amazing places. It was a great opportunity and will result in some great music that I can’t wait to share!

The next morning I went out along the Otago Peninsula toward Taiaroa Head and back to Otakou to record some of the sounds and wildlife of that area. I got near Taiaroa Head at sunrise and got some sounds, and the made stops at various points along the way to capture other interesting elements. These sounds will become part of a couple of new pieces I am working on – including a new dance film project with Caroline Plummer Community Dance Fellow and choreographer Louise Potiki Bryant. Again, more to be shared later!

It was a beautiful chance to see more of this area, and to be inspired by this place, and my time here in creating a range of new works.

I am loving this opportunity as the Mozart Fellow. I can not express my gratitude enough.

Another quick update, still furiously working away on the phd. I believe the end is in sight… I hope so!

I am also working on a piece for four pianos, a piece for guitar, some solo instrument pieces, and a couple of new larger scale theatrical pieces (more details to come soon).

In the meantime, here are a couple of recent pieces. First, a film from the 48hours film fest made by Joe Hitchcock and his daughters. Scored by The Scorelocks Collective.
A cute little story about a group of princesses.

Princess Rose and the Rose Flowers and the Other Princesses. from Joe Hitchcock on Vimeo.

And then we have a new piece for piano and electronics in my ‘Imaginary Communication’ series.